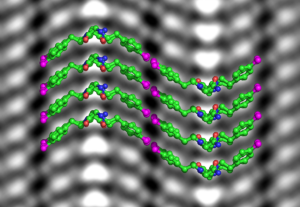 Protein-like molecules called polypeptoids (peptoids for short) have great promise as precision building blocks to create a variety of designer nanomaterials for medical and industrial applications. Like natural proteins, peptoids can grow or self-assemble into distinct shapes—such as helices, fibers, nanotubes, or thin and flat nanosheets—for specific functions. But unlike proteins, the molecular structure of peptoids is typically amorphous and unpredictable, like a pile of wet noodles. To reduce the trial and error involved in the process of making functional soft materials out of peptoids, scientist need a reliable way to see their atoms.

In the field of materials science, researchers typically use electron microscopes to reach atomic resolution, but soft materials like polypeptoids would disintegrate under the harsh glare of an electron beam. Now, Berkeley Lab scientists have demonstrated for the first time that cryogenic electron microscopy (cryo-EM), a Nobel Prize-winning technique originally designed to image proteins in solution, can be adapted to image atomic changes in a synthetic soft material.

Nitash Balsara, a senior faculty scientist in the Materials Science Division, co-led the study with Ronald Zuckermann, a senior scientist at the Molecular Foundry. As part of the study, published in the journal Proceedings of the National Academy of Sciences, powder XRD data of the peptoid nanosheets were collected at the Advanced Light Source (ALS) beamline 8.3.1, with assistance from George Meigs, an affiliate scientist in Molecular Biophysics and Integrated Bioimaging (MBIB). In addition, small angle X-ray scattering (SAXS) data were collected at the SIBYLS beamline 12.3.1 with assistance from beamline scientist Greg Hura and research assistant Kathryn Burnett, both of MBIB.

Read more in the press release on the Berkeley Lab News Center.